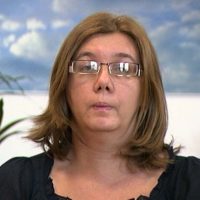 I suffered from myasthenia gravis, it is a disease in which the transfer of the impulse from the nerve to the muscles does not occur; as such there is fatigue and inability to achieve movement. A friend brought me to therapy by deceit. I’m a terribly skeptical person and I had no confidence in biotherapy. I came here as an escort. However, as soon as I entered I felt a completely different feeling, some kind of peace that I’ve never felt before. After the therapy, I had different, more negative than positive experiences, terrible fatigue, sleepiness, strange emotions, etc. After the first therapy, there has been no improvement. What is more, I felt my disease was worsening. Then I made a break of about half of year, but then I felt the need to go through with the treatments, since I like to finish I’ve started. After the second therapy, there was a big shift. I felt much better and all the fatigue and all the reactions were significantly more positive than the first time. I agreed with Ivan that we will make a four-cycle treatment, every month. I’m well now. Subsequently, after the first cycle, I began to feel a touch of warmth, tingling in the muscles. Everything which I, due to skepticism, considered impossible. All the medical indications have changed the blood test, PAP test, and all other objective and tangible factors showed that it is getting much better.