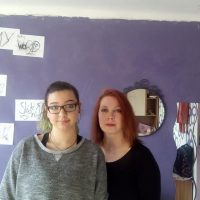 In October 2014, my daughter, Larissa (13) said she has something between her breasts that hurts her when touched. When I checked on it, it was something round, the size of the green pea. I must admit, though I did not want to show it to my daughter, I got panicky. Instead of going to the physician, I immediately contacted Ivan.
I had already positive experience with his therapy where I have seen the benefits of bio-energy healing.
I asked for a distance therapy and he was generous to contact me back immediately and start the treatment the next day. After four treatments, the lump did not disappear, and the pain was still there.
But, about ten days after, the lump moved about one centimeter above the original spot and some little dots appeared on Larissa’s skin there where the lump was. I knew something was happening there. Just the fact that I was able to see the reaction of the therapy was amazing, but I was still concerned about the outcome.
Due to some other issues, the holiday season, and the fact I wanted to relax about it all so Larissa stops worrying about it as well, we sort of forgot about it and I postponed the check-up at the physician.
The beginning of January, I decided to check on it again, and the lump was gone. No lump, no pain. All gone.

If you need additional information, a consultation or encouragement after exploring our website and reading the  Frequently Asked Questions, feel free to contact us.