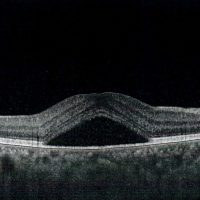 On the evening of Saturday the 6th of July, I developed a faint yellow glow in my field of vision. This became dark yellow/orange the following day, and by Wednesday when I went to an eye specialist I had, right in the middle of my field of vision, a brown patch with a dark circumference – much like looking through a coffee stain.

I was diagnosed with Central Serous Retinopathy. Causes for this include steroids (which I wasn’t taking), supplements, and stress – which I had plenty of. I was told there was no treatment, and the body had to heal itself. The specialist said it would take 3 months to recover, although a quick google will tell you it typically takes 4 to 6 months.
The following week I had a business trip to Korea and Taiwan for the whole week. This was stupid, as my vision deteriorated and I had to make an urgent trip back on Friday to see another specialist. The patch got darker, and also my vision became blurrier. Scans were taken of my retina or macula, and they were “eye-opening” for me, pun intended. The second specialist said the same thing, that there was no treatment and that we had to let the body heal itself which would typically take 3 months.

Luckily for me, my sister is Ivan’s student, and we immediately consulted him after that. He suggested distance therapy immediately. We started the therapy on Sunday 21 July, exactly two weeks after my first symptoms. He conducted the therapy sessions over four consecutive days. We then did another four sessions two weeks later.

On Monday 19th Aug., I had my one-month follow up with the second specialist. I will let the scans tell the story. The first scans were taken on the 19th of July. The left eye is normal. The swelling and dark circle can clearly be seen for my right eye. The second scans were taken on the 19th of August. You can see the dark circle and swelling have completely disappeared! In only one month! This after two specialists said 3 months, and Google says 4-6 months. My vision is now almost back to normal. This was also the main concern, as to how the eye heals was also crucial. My next scan will be in two months.

I think this is incontrovertible evidence attesting to the power and efficacy of biotherapy. I am most thankful to Ivan for my speedy recovery!