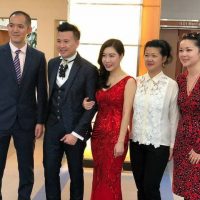 I received a phone call from my sister on a Wednesday back in May about my cousin, who has been admitted to ICU for his heart and lungs were inflamed and their functions had dropped to 20%. My cousin was in critical condition and the doctor advised his young bride to call my uncle and aunt to return to Hong Kong to see their son one last time. My cousin only married 3 months prior, and he was only 39 years old.
I immediately called Ivan to ask for his help. On the same day, he had performed biotherapy on him twice. My cousin was in an induced coma after the surgery of implementing an artificial pump for his heart. He had multiple tubes going in and out of his body. His heart and lungs were septics with an unknown infection. The blood test to determine what kind of virus was attacking him would take 4-7 days to complete. There was nothing to help save him but his will, and the artificial pump, and a miracle. If the virus gets the better of him he will surely die.
On Thursday we received the good news that he made it through the night, but was still in critical condition. Ivan continued to perform biotherapy on him for the next few days. His conditions slowly became better day by day and by Sunday we have news that his heart functions are up to 40%, and on the following Wednesday, he is able to remove his life support machines. In the end, the doctors are unable to determine what caused the inflammation, but obviously, we are just glad that he is still alive.

If you need additional information, a consultation or encouragement after exploring our website and reading the  Frequently Asked Questions, feel free to contact us.